We have been blessed on our property with a large amount of silver birch trees so this Spring time we intend to use some of them.Some will be used in making birch beer for my husband, which I’ll write about later, and some will go into making birch syrup.  In the coming years I might make birch wine as well for use in cooking but for now I’ve got more than enough other projects to work on and I really do not want to bite off more than I can chew. We’ve actually had birch syrup before but it is most definitely an acquired taste.  It is not quite as sweet, and it is much darker than maple syrup is.Making birch syrup is much more labor intensive then maple syrup is.  Maple syrup typically takes 40 gallons of sap to make 1 gallon of syrup.  Birch on the other hand takes 100 gallons of sap to make 1 gallon of birch syrup. This means we will be cooking down our sap for quite a while. Our first step, will be within the next month, to walk our property to assess which birch trees will be used. This will have it’s own unique challenge, thanks to the massive amount of snow we have received this winter.

We will be looking for trees that have at least an 8 inch diameter at breast height (1.3 m or 4.5 ft off the ground) and for a tree free of scars and one with a good looking crown.We have to also make sure there are no fungi present on the tree.  Fungi feed off the tree and we want trees that are healthy, not ones that are in the process of being decomposed.  We also cannot use any trees that have been exposed to pesticides nor other toxic substances. 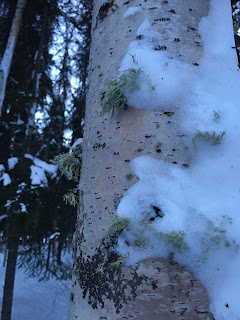 Lichen growing on a birch tree on our propertyLichen growing on the birch trees is completely okay since this is not actually harming the tree like fungi does.Come Mid April, when the ground is warming up and the sap is starting to rise after the trees long winter sleep we will be tapping anywhere between one to three trees.  We’re not going to do more than three simply because we do not have the ability to process that amount of sap, that quickly.  After all, my husband and I both work full time outside the home so we are limited on the time we have to get our homesteading chores done. This should provide, if all goes right, about a two to three gallons of sap each day.  The goal at that point is either to freeze the sap that we collect in the gallon jugs we have stored aside and then every couple of days, get the woodstove going, nice and hot, and simmer, simmer, simmer and simmer some more, the sap down until we have just the syrup left. I have contemplated using our stove to cook this down some but I just hate to think of the energy cost of this.  Keep in mind, our electricity cost up here is pretty high, hence the blog article I wrote a while ago while living in our house in Fairbanks.  Cutting our electricity bill.Instead I intend on using our wood stove and a pan with a wide base that we currently fill with water and place on stop of the stove to add humidity to our house during our cold, dry winters here. 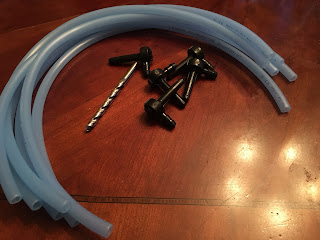 We intend on using our 5/16th drill bit which I learned was the suggested size for birch trees and we will slowly drill the hole in each tree.  Then we will pound in the now fully sterilized spiles with hoses which will be connected to the also now sterilized 1 gallon jugs which we will use to collect the sap.I can imagine my son will not be overly thrilled with this new chore around the property; he’s already not fond of shoveling rabbit manure nor bringing in firewood. Time will be of the essence here; the trees will only produce sap from the time the temperature starts to warm up till the trees gain their leaves, about 14 to 21 days, give or take. The sap is very perishable, it must be kept at a temperature of 41 degrees or below or it will ferment or go bad.  So if we cannot simmer it down then we must freeze it.  Not exactly easy come mid to late April when daytime temperatures are starting to reach the mid 40’s or 50’s.  Thankfully we have not harvested any rabbits as of late and we’ve eaten a lot of our vegetables from the garden that I froze last year so our chest freezer has been emptied some. Once the leaves appear on the trees, our birch sap season will end since the flavor will then turn undesirable at that point. The syrup we gain from this will certainly not be enough to last a full year, much less even a couple of months.  But with time we might get better at this and be able to produce enough to last us for at least 6 months.   I might potentially save some of the finished product of birch syrup and then combine it with chokecherry syrup from our chokecherry tree.  I’ll have to see later how I feel on that.  I have tried chokecherry birch syrup before and I almost prefer the taste of this on my pancakes over plain birch syrup. I do have to admit though, I am still an East coast girl even though I was born on the west coast.  I still love my fresh and pure maple syrup that we order once to twice a year from Patterson Farms. Thankfully, since we’ve been loyal customers of theirs from 2011 to now, they give us a good deal on the shipping and handling to North Pole, Alaska but it’s still not cheap buying several gallons of the sweet stuff from the east coast. The end goal, of course, always is, to get us less dependent on outside sources, more self reliant, more dependent on what our property and the area around us can provide. It’s better for our wallet, better for the environment and better for our family. Here in Northern Alaska, it’s a challenge to be sure, but the benefits are worth it in my opinion.